I study galaxy formation and evolution and aim to link key episodes in (dwarf) galaxy evolution to observational evidence through analyzing galaxy simulations, building mock observational surveys, and performing detailed comparisons to observed data. I am particularly enthusiastic about improving comparisons between theory and observations, for example through applying data-driven methods.

I am interested in combining information from dynamics, kinematics, morphology, and stellar populations to understand how galaxies evolve under influence of internal and external physical processes, and I believe that uncommon, or outlier galaxies may provide key insights into galaxy evolution physics. 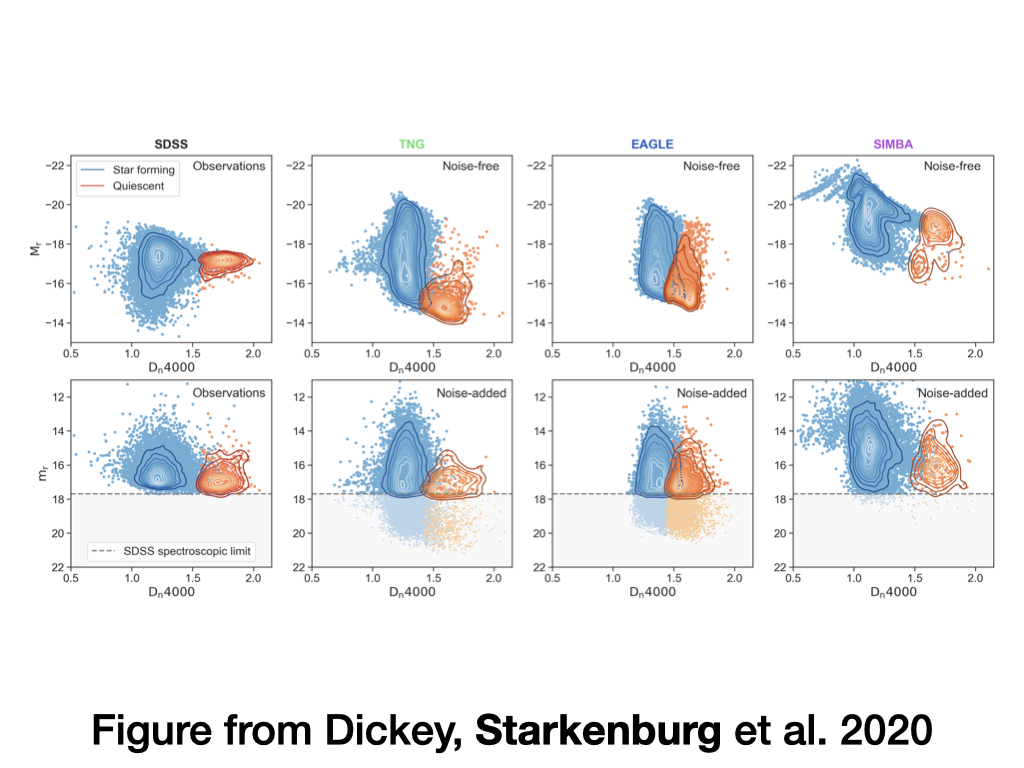 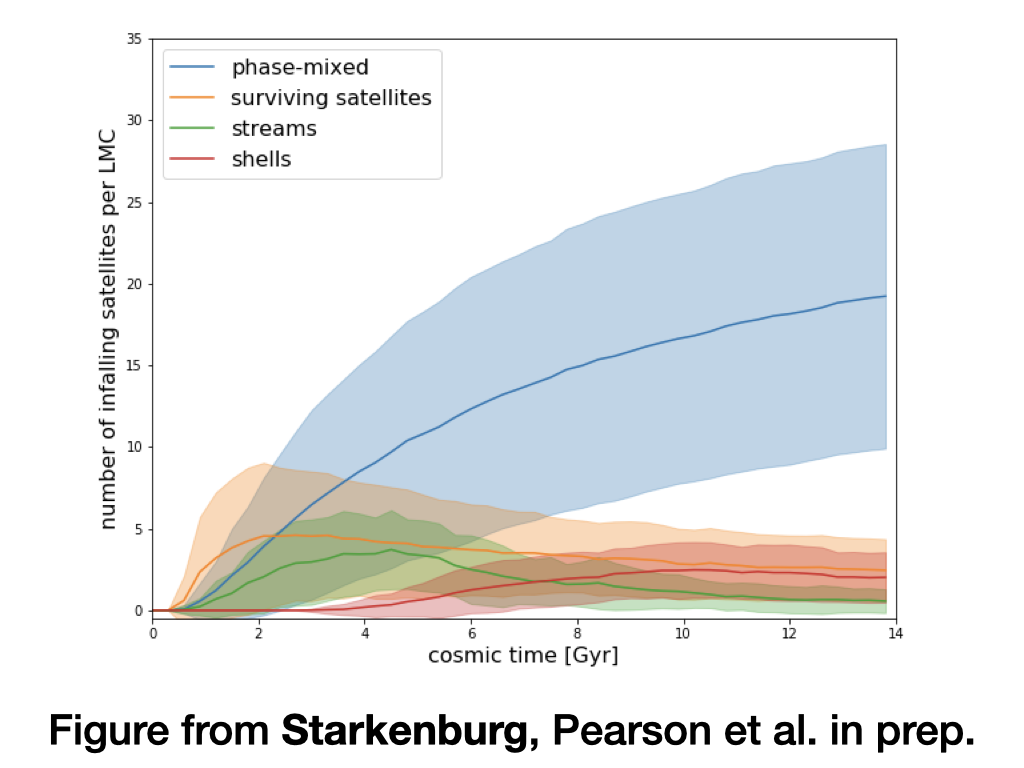 Stellar streams and shells from accreted and disrupted dwarf galaxies or globular clusters that are discovered in our own Milky Way have provided crucial insights in hierarchical galaxy formation. Moreover, in addition to surviving satellites, these features are the closest objects to provide constraints on the formation and evolution of galaxies at the low-mass end. With current and upcoming observational efforts we will be able to observe such features around external galaxies. For example, the Roman Telescope will be able to observe, and resolve into individual stars, the cold, thin, globular cluster stellar streams in the stellar halo of the Andromeda galaxy. Dwarf galaxy stellar streams may be observable around galaxies in the Local Universe. Most of the nearby galaxies are dwarf galaxies themselves, but we predict that the majority of LMC-sized galaxies do host stellar streams and shells, and that a fraction of those will be observable with upcoming surveys as the Roman Telescope and the Rubin Observatory. (Pearson, Starkenburg et al. 2019; Starkenburg, Pearson et al. in prep.) 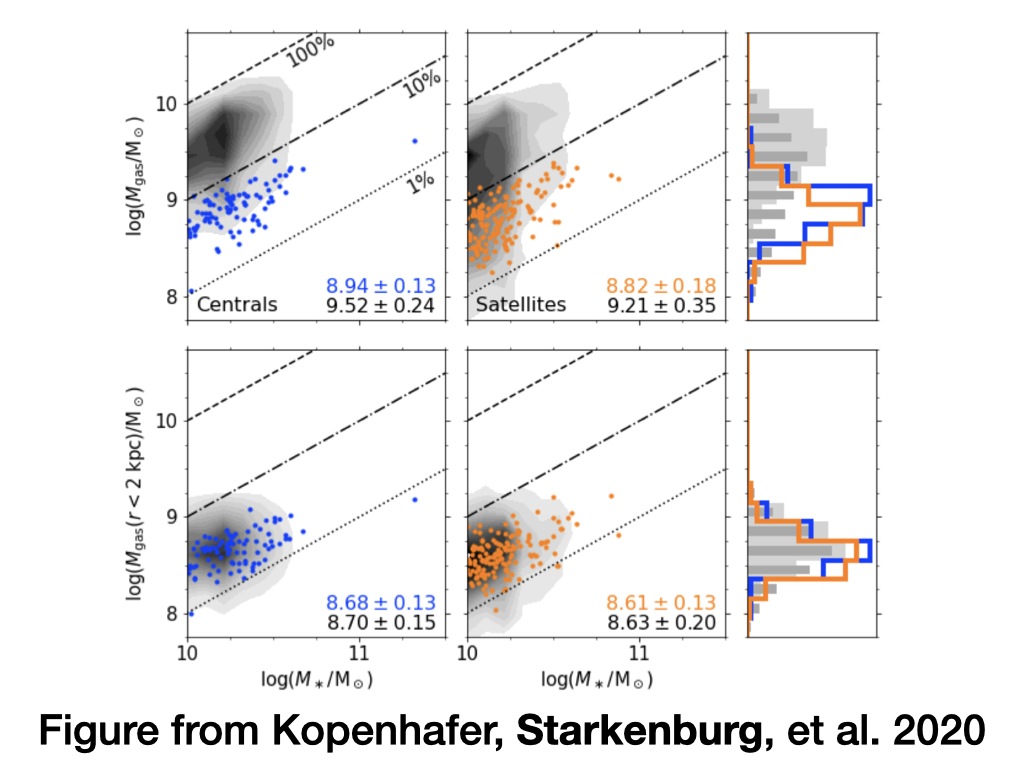 The large surveys utilizing Integral Field Units such as SAMI, MANGA, CALIFA, ATLAS3D and more, now allow for the study of spatially resolved structure and kinematics of a large sample of galaxies. Additionally, on the theory side galaxy simulations are now reaching resolutions and galaxy samples that make spatially resolved studies and comparisons possible. These detailed studies can provide the next stage of insights in all physical processes that govern galaxy evolution. A first step is to compare radial distributions. We show that while simulated star-forming galaxies approximately match those observed, this is not the case for green valley galaxies in simulations. On the other hand, observed galaxies that show centrally concentrated star formation, dubbed breakBRD galaxies, can also be found in simulations. These galaxies have reduced gas and star formation in their outskirts and are slowly quenching their star formation. Careful tracing these galaxies back in time indicates a likely cause in slow an subtle environmental effects instead of a single origin. (Starkenburg et al. 2019; Kopenhafer, Starkenburg et al. 2020) 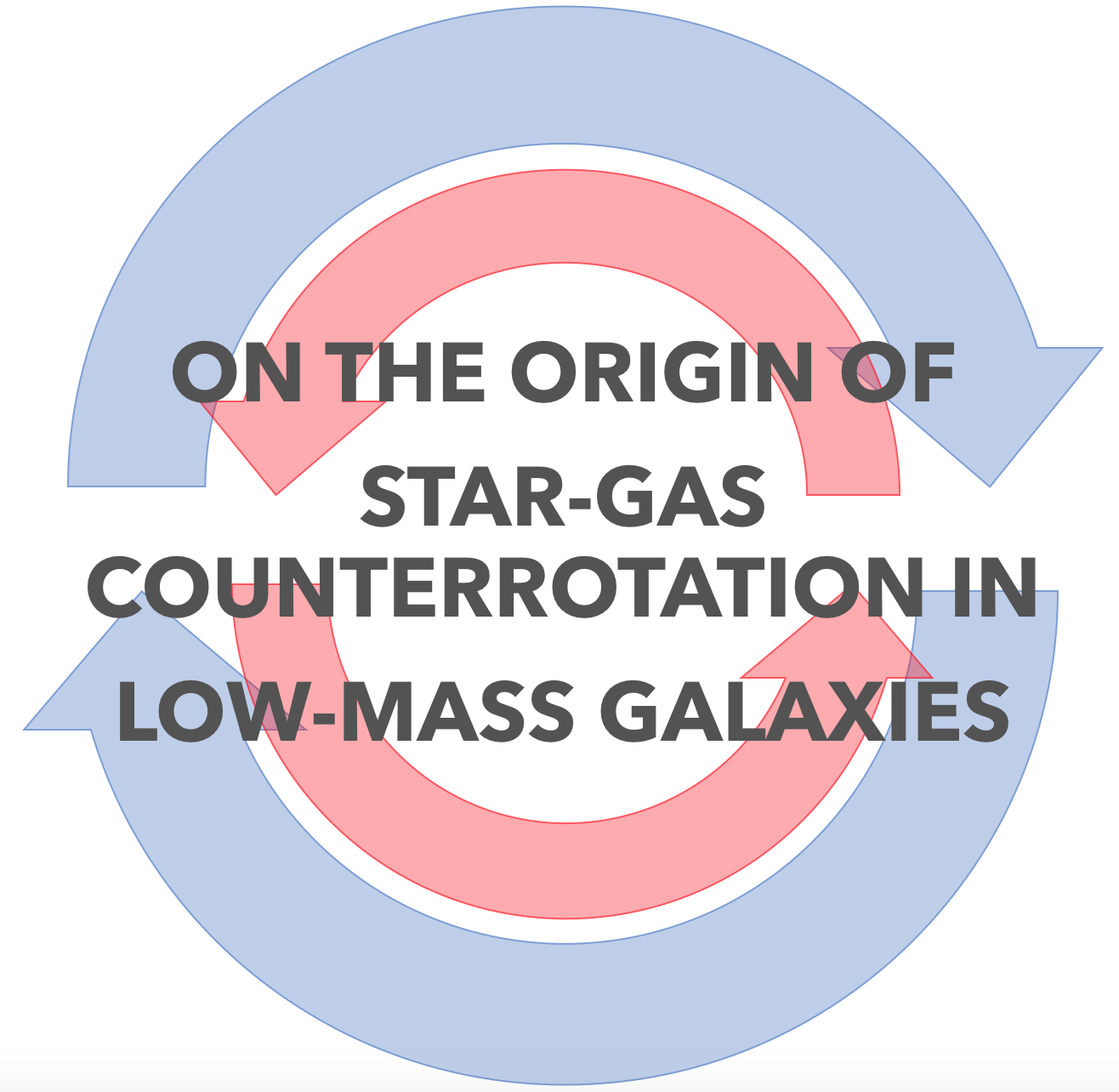 Galaxies with uncommon properties are exceptionally interesting to study as these may provide key insights into the physics of galaxy evolution. One example of such are counterrotating galaxies. We find and analyze systems in the Illustris simulation where the stellar and gas disk rotate in the opposite sense, providing the first statistical prediction of the occurence and formation history of these galaxies. This work is particularly timely as observational IFU surveys such as CALIFA, MANGA, and SAMI measure stellar and gas kinematics for a large number of galaxies. We find that star-gas counterrotating low-mass galaxies have experienced significant episodes of gas removal in the past, either through strong feedback or gas stripping, and subsequently accreted gas with misaligned angular momentum. Therefore counterrotation may be more strongly correlated with the environment and properties of a galaxy at earlier times instead of those at the present-day.(Starkenburg et al. 2019; Duckworth, Starkenburg et al. 2020) 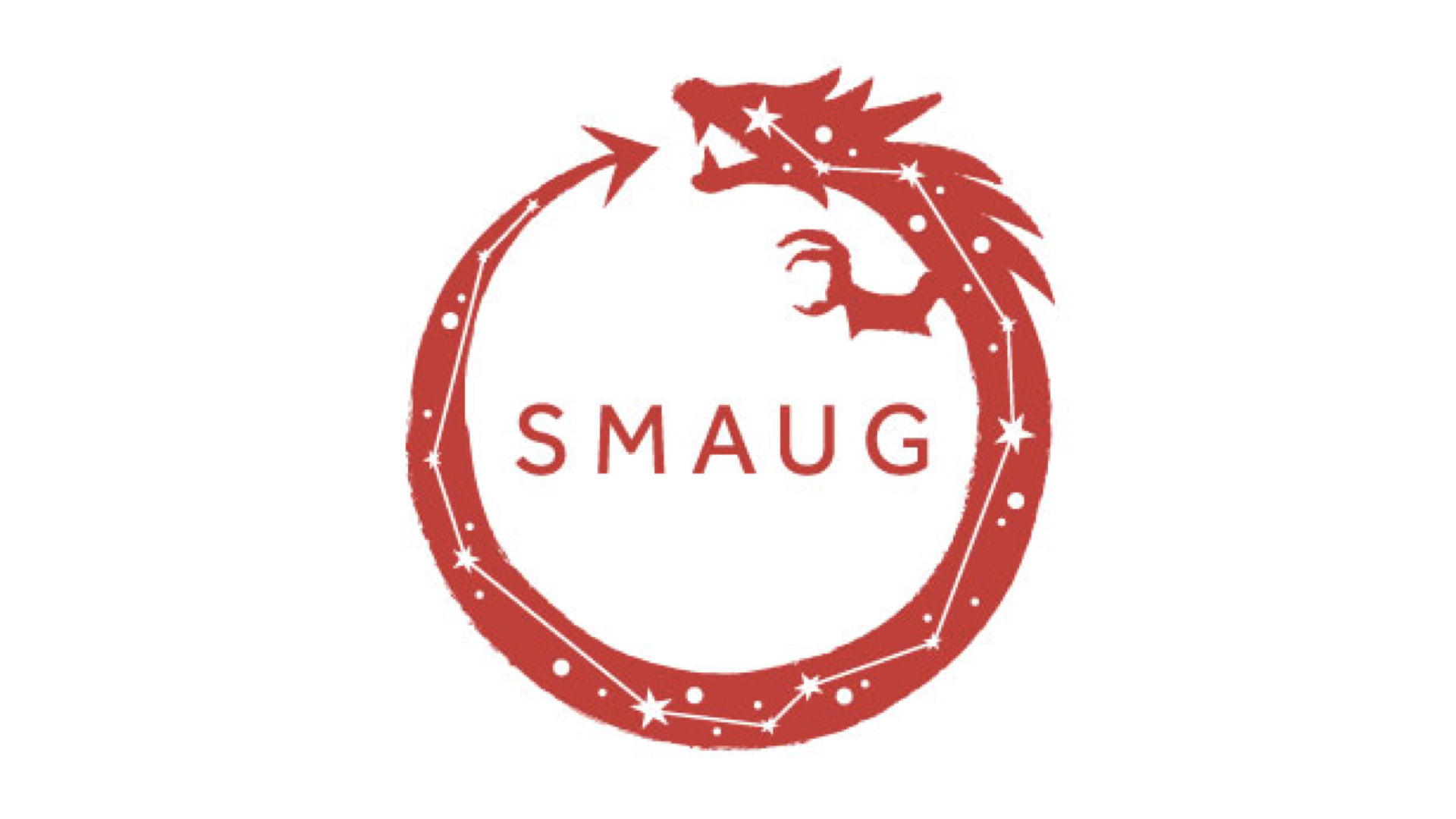 The SMAUG consortium (Simulating Multiscale Astrophysics to Understand Galaxies) endeavors to improve our understanding of baryonic processes in galaxy formation by connecting large-scale cosmological galaxy simulations to high-resolution small-scale simulations describing the details of ISM structure, star formation feedback, and AGN accretion and feedback. I am a member of the consortium and a (co)-leader of the working group for synthetic observations. 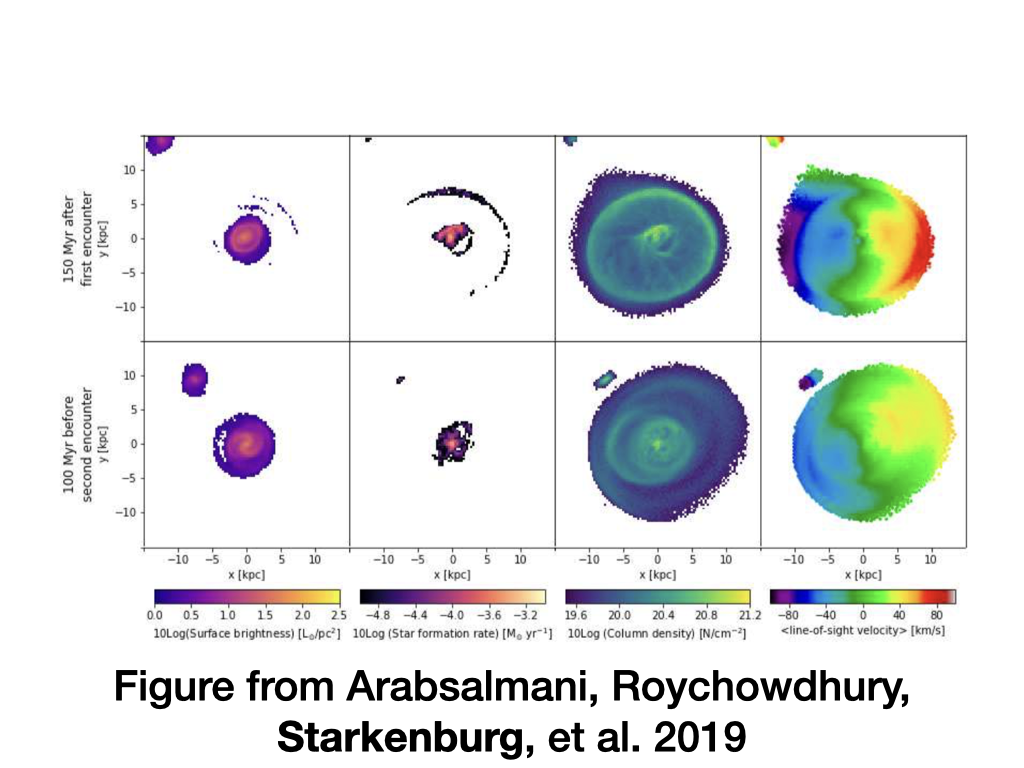 Merging dwarf galaxies can show many of the features of their more massive counterparts. However, as the galaxy halo mass-stellar mass relation is predicted to be steep at the low-mass end apparantly minor mergers in stellar mass ratio can be much more significant in halo mass ratio and cause major merger-like effects such as creating dwarf collisional ring galaxies and significantly increasing central supermassive black hole accretion. (Arabsalmani, Roychowdhury, Starkenburg et al. 2019; Mercedes-Feliz, Starkenburg and Bellovary in prep.) 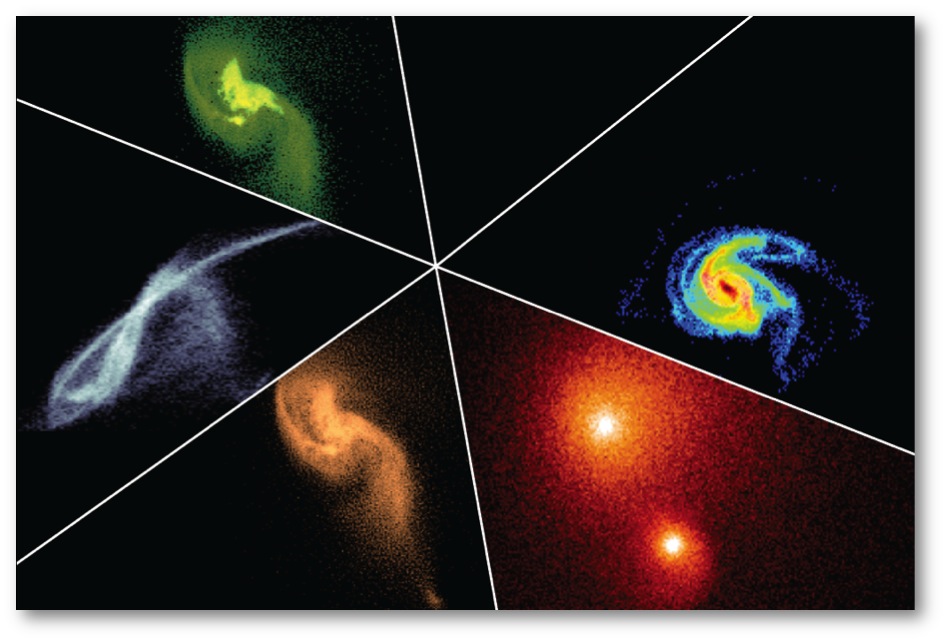 Within the LCDM cosmological framework dark matter halo mass function is almost completely scale-free. The formation of galaxies however is not scale-free. There should therefore be a large number of low-mass halos that have not been able to form stars or a galaxy within them, and that are thus not observable in light. These so-called dark halos can however have a strong gravitational effect, for example on low-mass structures like dwarf galaxies. In this series of papers we study the interaction of dwarf galaxies with their dark satellites. Such an interection can produce effects similar to major mergers for larger galaxies, creating large tidal arms and tails, and central or offset starbursts and long-term increases in star formation in the dwarf galaxy. Studying candidates of these mergers in the universe may provide an additional route to understanding the properties of dark matter.(Helmi, Sales, Starkenburg, E., Starkenburg et al. 2012; Starkenburg et al. 2015; 2016a; 2016b)